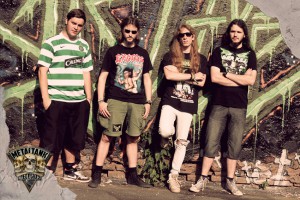 The Slovenian Bay-area thrash metal maniacs hearing under the name of Panikk inked a deal with Metal Tank Records that will release their upcoming album entitled Unbearable Conditions. Panikk as the name suggests for something fast, mind-blowing and erratically blood-pumping metal put simply as THRASH!

Influenced by Bay area metal bands they represent it with full-blown-in-your-face voyage to the world of face-melting riffs unwilling to slow down to the last beat and you will want to take that trip again and again andAGAIN! For more information consult www.metaltankrecords.com

Band comment about the upcoming release: We went into DYZ Sonic Temple Studio in March to record a debut album Unbearable Conditions under the surveillance of producer Dyz. Were pumped with thrash that is energetic and tight sounding and so is our music which doesnt give a fuck of todays trends. We wrote 6 songs anew and took 2 songs off of demo rearranged them and made them even better. We invited along two friends Domen Justin (Dyz) and Tim Draksler who contributed a few solos.